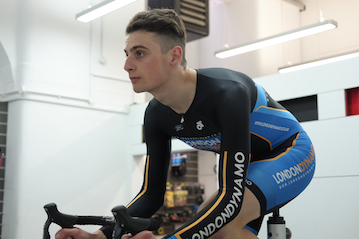 Cyclefit have been working with the London Dynamo Race Team to provide our riders with their Pro Tour level bike fits. Here is Sam Christy's review of his session with them:

'We started with Jimmy asking some questions about my cycling and the type of riding I do, as well as any issues I felt I was facing. As a racer, I had made some pretty dramatic changes to the setup of my bike, from a fit several years ago, in search of a more aerodynamic position. However, it was coming at the expense of some pretty serious discomfort, with longer, sustained efforts; presenting in my forearms, shoulders and saddle area.

'Jimmy put my bike on a static turbo trainer and fitted a special pressure mapping device to the saddle. He asked to see the positions I adopt in different scenarios (namely my more relaxed “Road Race” or “Endurance” position and my very low “TT position”). Afterwards, he showed me a graph representing the data recorded by the pressure mapping tool; explaining that my saddle discomfort was a result of having the pressure concentrated dangerously far-forward, on the soft-tissue area. This was evident with the small, red circle at the tip of the saddle on the graph!

'This was clearly not a healthy position and could have even potentially caused damage over time, so I was glad to address it sooner rather than later! Moreover, from a performance standpoint, it was not a stable position, which would be focused on more later. Perhaps unsurprisingly, the saddle that came with my bike was a generic “one size fits all” and was part of the issue; so Jimmy recruited a special “sit bone measuring device” to help determine a more appropriate saddle. The one he arrived was markedly different; with a cut out in the middle, designed to alleviate pressure in the soft-tissue area. It was much more comfortable. The pressure point tool now reported a significantly larger contact point, with a healthier green and yellow colouring, indicating that the load was more evenly distributed.

'Next, we moved onto the footbed analysis, which I was especially keen to do, as a new pair of shoes had brought with them a burning sensation on the outside of my right foot. More impressive machinery! This time, a special footbed that would turn from a solid to sort of jelly, at the flick of a switch. In a few minutes, it had produced two carbon insoles, moulded perfectly to the shape of my feet. My shoes immediately felt more “fitted” and, a thousand kilometres or so later, I can say that they are the most comfortable shoes I have owned.

'Bringing out a massage table, Jimmy put me through an extensive sequence of stretches to assess my flexibility. The varying measurements he took showed that flexibility is more complicated than simply being “flexible” or “inflexible”, as I had thought. Instead, I demonstrated good hip flexor flexibility but very poor hamstring flexibility, which would prove a limiting factor in the type of position that I was trying to achieve. The upside of having limited hamstring flexibility is that it is highly improvable and I was given some useful stretches to work on it over the coming months.

'Returning to the bike, Jimmy used a complex array of lasers to measure my bike - very cool! My bike was then emulated exactly on a Cyclefit jig, which was adjustable in every respect (including crank length). Multiple cameras were trained on me and dot stickers were applied to various parts of my body, for software analysis, as I rode the jig at a set power output. Video playback immediately highlighted the effects of my unstable position on the saddle, with a pronounced “swinging of my torso and lower back”. This, in turn, was forcing my upper body to compensate, in an effort to “take up the slack”; causing the discomfort I had experienced - riding in my lowest position had sometimes felt like holding the plank! Furthermore, Jimmy explained that it came at a high metabolic cost and would restrict my power output in that position - this corroborated with my own training and racing data, which consistently showed a 15 to 20 watt discrepancy between my test data and races.

'Jimmy then ran me through the changes that he was going to make; including lowering my saddle slightly, levelling it and bringing it several centimetres forward (more under my center of mass); the bars were also brought down to match. The lengths of the cranks were also reduced by 7.5mm, to enable better pelvic rotation, whilst taking the emphasis off of my hamstrings. Returning to the jig, I immediately felt more “planted” and stable; it felt like a position I could hold for hours rather than minutes. Finally, I was recommended a follow-up session in the offseason, to review the changes and possibly make some more, when there is greater scope to adapt (as I am in the middle of the my season currently).

'All of the changes were recorded in a spreadsheet, which would later be compiled into a detailed report and emailed to me, for future bike fits and equipment changes. After over 1000 kilometres of riding, including several criteriums and a particularly punishing road race, I am glad to say that the pains I was experiencing have disappeared and I feel measurably more stable on the bike, which has translated into greater confidence in the cornering and handling of my bike.'

Thanks to Cyclefit for their support of the Club and to Sam for his review.